Newsflash: Your Dog is NOT Trying to Dominate You

There is one word that is thrown around the world of the domestic dog way too much, with way too little understanding. The word, my friends, is dominance. Never in the history of the English language has one word been so widely misused and wrongly attributed than the word dominance.

Although most dog owners freely admit to not really knowing what dominance is or what it looks like, it certainly doesn’t stop them from labeling their family dog with it. Even veterinarians and other dog professionals use the word all the time, yet have no idea what dominance really means.

So, I’m here today to set the record straight, once and for all, regarding dominance. No matter what anyone tells you, your dog is not trying to dominate you. 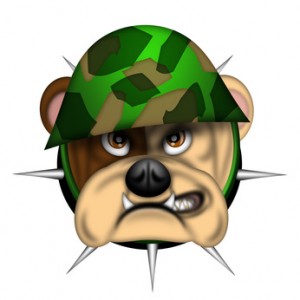 Whenever I hear someone say that their dog is being dominant over them I picture the dog organizing this coordinated plot to take over control of the family likes some kind of revolutionary dictator. Their rally cry can be heard in dog parks everywhere as dogs compare strategies to overthrow their humans hosts. Let’s give a cheer for the canine freedom fighters!

Sounds ridiculous, and it is. Dogs have no desire to take over control of us in any way, shape or form. Our pooches are not power hungry punks looking to take over the world, they are part of our family units and are no more trying to take control of us than our children are. Do you think that just because your child disagrees with you, doesn’t want to do something you want him to, or takes something he’s not supposed to that he’s trying to dominate you and take your role as “leader?” Of course not. And neither are your furry kids.

What does dominance really mean

Let me clear the air and give you a better understanding of what dominance really means in the dog world. Every dog is either dominant or submissive to every other dog in relation to resources. This means that if two dogs are presented with a single resource (like a bone, for example) the dominant dog will get the bone, while the submissive dog will allow him to take it. If two dogs are both pretty confident and feel that they are the more dominant dog, then they will get physical with each other until one dog eventually submits (which could be only after major damage has been inflicted).

That sounds kind of harsh but physical altercations are very rare. Don’t forget dog packs are not volatile groups filled with conflict, but actually harmonious family groups. The outdated belief that dog packs are competitive and confrontational has long been dismissed as inaccurate. Those early finding were based on captive wolf packs which consisted of wolves from a variety of different packs. Once we had the technology to effectively study wolf packs in the wild we discovered how different they were from the captive models. Wild wolf packs consist of family members and although they do have a social hierarchy (just like human family groups have), they are not based on conflict, but on mutual understanding of each others place and role in the pack.

Domestic dogs, although not identical to their wild cousins, do have many similarities to wolves, including a stable, non-confrontational group dynamic. There are reasons why they do the behaviors that they do, but dominance is not one of them – especially where we are concerned. Here are some common behaviors that I’ve seen been attributed to dominance.

1. Humping (other dog or maybe your leg – that’s always nice and embarrassing) – Most common reason: play and/or arousal. Dogs will mount all the time in play groups or when they are especially excited.

2. Not listening to you – Believe it or not, most of the time they don’t listen to you is that you never taught them the behavior or you’re not communicating properly. I can’t tell you how many people tell me that their dog won’t come when called, and when I ask them how they taught the dog to come they say, “what?” If you don’t teach your dog something, don’t expect him to do it. Also make sure you remember that dogs don’t know English (yes they can make word associations but not the language).

3. Possession over an object and/or food – This is a behavioral issue but it’s not dominance. Resource guarding dogs do so because of an anxiety (fear of losing the object) not because they trying to make a point of their superiority.

Nice! I hope that clears up that very common misunderstanding. The thing to remember is that your dog is part of your family and should be treated as such. He needs rules, boundaries and limitations just like your kids do, and being a good leader to your dog is really just being a good parent.

Because of it’s misuse, I’ve actually thrown the word dominance out of my vocabulary (well, with the exception of this post) and I invite you to do the same. Both you and your pooch are better off without it.