Puppy Socialization Will Save Your Dog’s Life

I’m going to tell you something that is going to sound bit surprising: I want to put myself out of business. Yep, you heard me correctly. My new professional goal is to make sure you never hire me.

The bulk of my clients call me because they are having some behavior problems with their adult dogs. These dogs are often between the ages of 1 and 3, and the behaviors have usually been going on for a while by the time they actually reach out to me.

In almost every case the problem stems from lack of socialization. Personally, I can’t believe what some people call socializing their dog. Very few people seem to get this right and it is without a doubt the one thing that can make all the difference.

True socialization is getting your dog accustomed to and confident around everything in this crazy world. I want your dog to have a “been there done that” attitude by the time he’s six months of age.

The three things I want you to concentrate on are socialization to people, dogs and environments. Those three will impact just about every puppy’s (and owner’s) life and those are three things that need to be addressed in mass quantities.

What is good socialization? 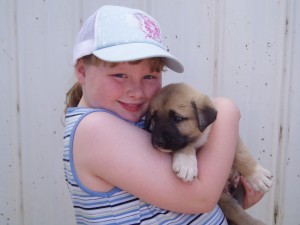 Dr. Ian Dunbar, who is considered by most dog behavior professionals to be the foremost authority on puppies believes that every puppy should have contact with 100 different people by the time he’s eight weeks old (that means you, breeders) and another 100 during the next eight weeks. In case you’re keeping score at home that’s 200 different people your dog should have interacted with by the time it hits four months of age.

Although I agree with Dr. Dunbar, I’m also a realist and know that no one on the planet is going to come close to those numbers. So, for my puppy clients, I shoot for at least ten new people every week. I would feel much better if it was ten a day, but I understand that most of you can’t quit your jobs to socialize your dog.

Let all of these people interact with and handle your puppy, but supervise everything. It’s very important that all of these encounters be positive experiences for your pup or else we’ll be headed in the wrong direction in a hurry.

All of the above guidelines also apply to socialization with dogs. Letting your dog sniff three butts a week during your walks around the block will just not cut it. You should also be aware that true dog interaction is without human constraints, meaning without being tethered to you by a leash. Puppies must be allowed to interact with other dogs in an off-leash environment so that they can learn bite inhibition.

That’s exactly why those puppy teeth are like little pointy needles– to enable the pup to learn that biting hurts and give him a nice soft mouth. Some puppies can put up with an awful lot of inappropriate biting, so it’s important that you socialize your pup with older dogs as well. Older dogs will not tolerate too much juvenile behavior and will make corrections accordingly. By letting your pup interact with older dogs he will learn that not every dog enjoys being treated like a squeaky toy. 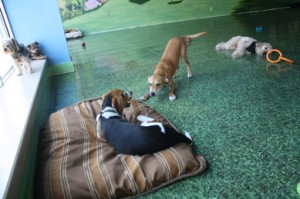 So I’m begging you to go out there and socialize your dog as soon as you bring his furry little body home. This is where a lot of traditional vets give some really bad advice. They tell you not to let your dog near any other dog until he’s had all his shots (around 5 – 6 months of age). I understand where your vet is coming from. His job is to preserve the physical health of your dog as best he can. The problem with avoiding contact with other dogs is that he’s doing that at the cost of your dog’s mental health, which is just as important. Read what the America Veterinarian Society of Animal Behavior says about socialization.

We can do both though. I don’t want you to take your new pup to the dog park where we know nothing about the health of the other dogs. Instead, set up encounters with other dogs you know are healthy and have all of the proper vaccinations. Play dates with people you know are a great way to get together with friends while getting your puppy the quality canine time he desperately needs. Doggie daycares are perfect for socialization providing they will take a young pup (not all do). There, he’ll play with ten to twenty dogs in one day in a clean, safe environment.

So please, let your puppy play with as many dogs as possible, but be smart about it. If you don’t create these kinds of encounters for your new pup early on you may be on your way to creating an adult dog that is fearful, anxious and/or aggressive with other dogs.

The next stop on our journey of socialization enlightenment is environment. The human world is filled with all kinds of weird places, noises, contraptions and events, and unless your pooch learns about these things as a puppy, there’s a possibility that he may really freak out when exposed to them when he’s older. However, if he’s seen it all when he’s young, he will learn that all this weird stuff in the human world is not going to harm him.

It’s like if you woke up this morning and a UFO was parked in your back yard. I’m pretty sure it would make you more than a little uneasy (a change of underwear may even be in order). But if you’ve seen some UFO’s before and nothing bad happened, you would probably be okay with it.

Everything your dog sees for the first time is a UFO to him. If, by a year old, your dog has never seen a moving train, and one goes by making all that noise, he’s going to go into panic mode. Think about how scary an experience it would be if you weren’t expecting it and had no idea what it was. So we need to get your dog exposed to everything possible that this human world of ours has to throw at him. That way, no matter where your life takes you and your dog, he will be cool with it.

One point to remember is that we need all of these experiences to be either positive or a non-event. It’s natural for your dog to be nervous or unsure around something he’s never seen before, but we need to keep him around it until he sees that although it may look scary and make loud noises, it’s not going to harm him. Be careful not to overwhelm your pup, and recognize when a situation may be too much stimulation for him, or at too high an intensity.

Remember that as soon as you bring your puppy home the window of prime socialization time is closing daily. And the longer you wait the harder and more time consuming it will be.

Here’s a great video that goes over it so well:

So get out there and socialize those puppies, and there’s a good chance you’ll never need to call me to work on behavioral issues.

Thanks. I hope to not see you soon.